Millions of households struggling to put food on the table 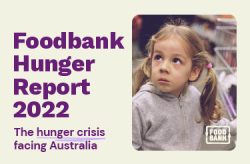 Monday 17th October 2022, SYDNEY: On any given day, over half a million households in Australia are struggling to put food on the table, and disturbingly, those with children are being hardest hit.

More than 2 million households in Australia have run out of food in the last year due to limited finances, sometimes skipping meals or going whole days without eating. This has meant that 1.3 million children lived in food insecure households during that time.

Unsurprisingly, the rising cost of living is the most common reason why so many are struggling to meet their household food needs, with the cost of food and groceries confirmed as the top cause followed closely by energy and housing costs.

Assumptions that this is affecting only those who are unemployed or homeless are incorrect with the research showing that over half of food insecure households had someone in paid work and a third of households with mortgages have experienced food insecurity.

Foodbank Australia CEO, Brianna Casey, has witnessed the rise in demand for food relief services over the past year, but even she was shocked by the troubling picture of today’s Australia exposed in the report.

“We know how important it is for people to have access to nutritious food, yet the rising costs of energy, fuel, groceries, rent and mortgages have put this fundamental need beyond the reach of more and more people with no respite in sight,” said Ms Casey.

“These results should make everyone stop in their tracks. The numbers being reported are massive and hard to process, but they represent the harsh reality of living week to week when the cost-of-living crisis collides with an income crisis and the household budget now lists food as a discretionary spend,” said Ms Casey. 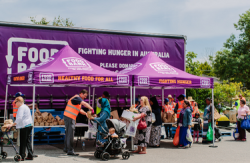 The report signals that the problem is only set to get worse with half of all households experiencing difficulty saying that being unable to afford food is happening more often.

The food relief charity is hoping that next week’s Budget will deliver positive change.

“We have heard the Treasurer caution that the October budget is not the time for new spending measures to deliver relief to struggling families, but with more than a million people a month already seeking food relief, if not now, then when?”

This report presents key findings from the Foodbank Hunger Survey, which was conducted between 11 and 28 July 2022, through an online questionnaire of 4,024 people in Australia aged 18 years or older. The sample was nationally representative by age, gender and location (capital city / rest of state) in each major state, with stratified quotas to ensure all major states have a robust minimum sample size of n=600 or above. The data was weighted to nationally representative proportion of age, gender, state and location (capital city/ rest of state).

The term food insecurity covers a range of experiences – from being uncertain about getting enough food and compromising on nutrition right through to disrupted eating patterns and reduced food intake.