Women bear the brunt of hunger in Australia

Foodbank has today revealed that women in Australia are 50% more likely to experience food insecurity than men and, in fact, a quarter of all women have experienced food insecurity in some form in the past 12 months.

The Foodbank Hunger Report 2019 discloses that the events that make women susceptible to food stress are also different to those for men. Women are significantly more likely at some time in their lives to have experienced domestic violence or financial abuse or to have raised children on their own for an extended time. Men, on the other hand, are more likely to have been unable to find a job for a lengthy period.

Food insecurity is also more likely to take an emotional toll on women the research finds, as they report being more likely to feel stressed and anxious than men. For example, mothers are twice as likely as fathers to feel like a bad parent when there is not enough food in the house.

The Foodbank Hunger Report, now in its seventh year, surveys 2,000 charities and 1,000 individuals from around the country who are experiencing food insecurity. Foodbank Australia CEO, Brianna Casey, explained the report aims to better quantify and understand what is a growing social crisis.

“We hear so many heart-breaking stories, from mothers skipping meals so their children can eat, to elderly women left on their own feeling isolated because they can’t offer their neighbours or friends so much as a cup of tea or coffee” she said. “We knew the situation was bad, but this year’s report confirms that it’s getting worse and the impact is skewed towards our most vulnerable women in the community.”

“In spite of the fact that Foodbank is now providing food relief for more than 810,000 people every month, what the report shows is that our charity network is still not meeting demand. There has been a 22% increase in the number of individuals accessing food relief in the past year and only 37% of charities believe they are meeting the full demand in their communities” stated Casey.

In the wake of these findings, Casey has challenged the government to act. “This problem is clearly not going away in fact its impact on the health and wellbeing of our communities is only going amplify. What is required is a long-term, whole-of-government plan to tackle this crisis head on. We are calling for a commitment to introduce a National Food Security Strategy to ensure we achieve zero hunger in this country by 2030,” Casey said.

The public can join the growing movement on social media to shine a spotlight on the issue of hunger in Australia by using the hashtags #HiddenHunger and #ZeroHunger, donating at foodbank.org.au or asking their local Member of Federal Parliament what they are doing to address food insecurity in Australia. 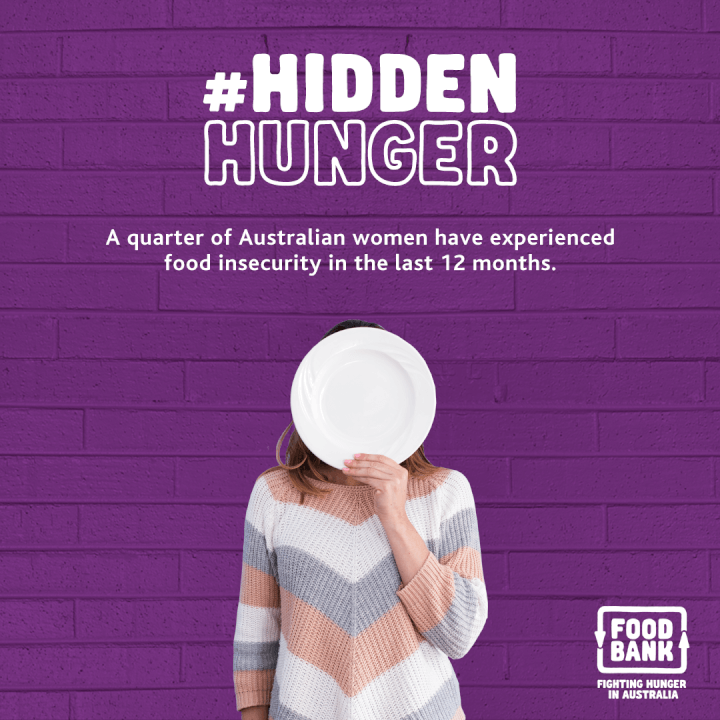