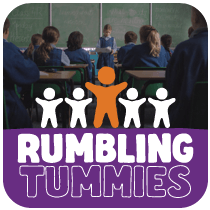 15 April 2018 – Australia’s largest hunger relief organisation, Foodbank, has revealed that it is more likely for a child in Australia to go hungry than an adult in 2018.

Foodbank found hunger amongst Australian kids is more common than once imagined, with 1 in 3 parents living in food insecure homes saying their children go hungry at least once a month. Meanwhile, at least once a week, 18% of food insecure children go to school without eating breakfast, 15% go to school without a packed lunch or lunch money and 11% go to bed without eating dinner.

With data collated from more than a thousand Australian parents with children under the age of 15, Foodbank uncovered that the major factor driving the growing need for hunger relief in Australia is the rising cost of living. An unexpected bill or expense (52%) and house payments (38%) are two of the most prominent causes of food insecurity in homes with children under 15, the organisation found.

Foodbank Australia’s CEO, Brianna Casey, said, “It is both heartbreaking and unacceptable to hear that children are going hungry anywhere in the world, let alone in Australia. As the cost of living continues to rise, parents are really feeling the strain of these financial pressures on their household budgets, forcing some to make impossible decisions for their families. Nine out of ten of these parents tell us that they have skipped meals so their children can have food on their plates, with 36% skipping meals on a weekly basis.”

Foodbank provides food for over 652,000 people a month, however, their front-line charity partners report that demand for food relief has increased by 10% in the last year. Furthermore, they are forced to turn away 65,000 people every month due to lack of food.

“As a community, we might be excused for not hearing one child’s stomach rumbling, but we simply cannot ignore the sound of thousands of children going hungry in Australia each day,” said Casey.

“If we want all our children to thrive and succeed, we can’t let their hunger go unheard. Whether you are from corporate Australia, government, or someone who believes in a better Australia, we really do owe it to these children to ensure Foodbank can get more food to the most vulnerable in our community,” Casey concluded.