The New Faces of Hunger 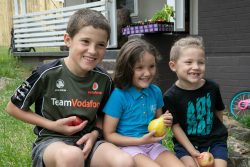 Do you remember Leanne and Jack and their young family? Their story in our recent letter touched many hearts… especially the news that little Robert, aged just 11, had a heart attack, then a further illness, Sydenham’s Chorea.

It was hard to believe that one young couple had to cope with so much in such a short time. The reality is, this is just one story among hundreds; hard-working Aussie families who never in their wildest dreams imagined they would be facing such hardship.

Your kind response to this appeal made a huge difference. Foodbank has delivered food hampers brimming with ingredients for healthy meals
to Leanne and Jack to feed their kids, and other families, too.

Leanne and Jack face many hard days ahead. Jack has still not secured a job. Robert is struggling to cope with his new medicine. And they are not alone.

Families who have never needed help to put food on the table for their children are now desperate, and it could be anyone, in your street or the school yard.

Groups like Deloitte Access Economics estimate the further loss of 145,000 jobs over the next two years. That’s countless thousands more families going hungry. And that’s why Foodbank is aiming to deliver an extra 2.7 million meals a month to families in need.

Thank you so much for your care and support for families like Leanne and Jack’s. Knowing that people like you care so much about them brings such comfort. Your generosity is bringing hope and filling empty tummies.